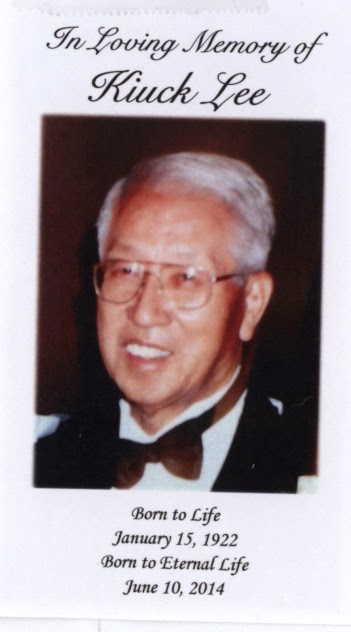 Lee, Kiuck PhD Dr. Kiuck Lee died peacefully with his daughters by his side on Tuesday, June 10, 2014.

He was immeasurably devoted to his family, and dedicated to his students.

After graduating from the Seventh Imperial High School in Kagoshima, Japan, he attended the Kyoto Imperial University.

He was a member of the first graduating class of Seoul National University, College of Arts and Sciences, where he received his bachelor's degree and master's degree in physics. One of the first three recipients of a PhD in physics at Florida State University, he studied under the mentorship of Dr. Alex Greene. As the first doctor of modern physics in Korea, he spent his young professional career representing Korea at various international meetings including President Eisenhower's Atoms For Peace. His early students went on to become physics professors who have trained all subsequent physicists in Korea, as well as physicists and scientists in Europe and the United States.

He spent forty years on the faculty of Marquette University's Physics Department, where he was respected as a great teacher, mentor, colleague, scientist, and leader.

Since the 1970s he led a massive movement to educate Korean scientists, ultimately resulting in the scientific and economic advancement enjoyed by Korea and the rest of the international community. His efforts directly resulted in the establishment or the improvement of premier institutions and organizations such as Seoul National University, Korea Advanced Institute of Science and Technology, Korean Scientists and Engineers in America, Association of Korean Physicists in America, Korean Physical Society, American Physical Society. In partial recognition for this work, he was named an honorary citizen of the city of Seoul, Korea in 1995.

Up until his death, he was active in multiple organizations for Korean-American scientists and engineer, both at the national and regional level. He continued to present scientific papers at international meetings, providing inspiration for younger scientists.

Through his beloved family and his countless devoted students and colleagues, his legacy of pursuing the highest academic talents for the sake of peaceful improvements in our world will live on forever.

Funeral service at 11:00AM.
Entombment at Wisconsin Memorial Park to follow. -